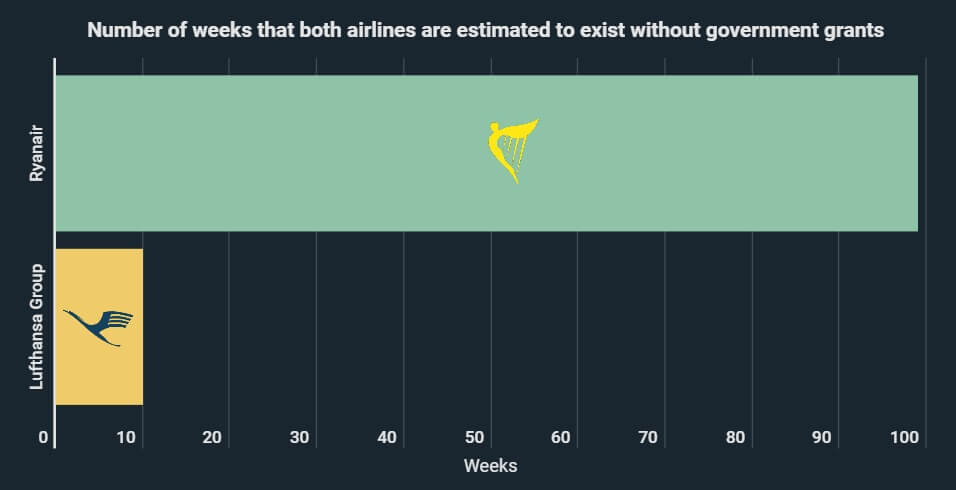 While Ryanair’s liquidity is sufficient to cover costs for another 99 weeks, without state subsidies Lufthansa is facing insolvency in 10 weeks. This is shown in a new infographic from Kryptoszene.de. There are also big discrepancies between the two largest airlines in other respects.

This March, Ryanair cut its flight schedule by 97%. Lufthansa in turn cut 94% of its flights, according to „Eurocontrol“ data. Despite facing similar conditions in the face of the corona crisis, „Alliance Bernstein“ estimates that there is a considerable gap between the German and Irish airlines when it comes to liquidity.

In terms of market capitalization, Ryanair’s market value of 12.1 billion euros exceeds that of Lufthansa by 194%. A glance at the share price development shows that Lufthansa shareholders have been empty handed in the past. In their annual review, the price of Lufthansa shares fell by 50.4%, while in the same period Ryanair securities climbed 12.1%.

Ryanair flew 152 million passengers last year, while Lufthansa carried 145 million. Greater differences are apparent in the equity ratio. In the case of Ryanair, the equity ratio is 33.7%. The Lufthansa Group, on the other hand, has equity totaling just 23.37%.

Nonetheless: at least in Germany, Lufthansa shares enjoy far greater popularity. Google data show that German airline stocks are much more popular on the search engine. Lufthansa’s Google trend score, an indicator of relative search volume, reached 74 in the last week of May. The equivalent score for Ryanair shares however is just 37. A value of 100 stands for the largest possible relative search volume.

Ryanair CEO Michael O’Leary’s most recent statements confirm that the two airlines are indeed locked in competition with one another, with O’Leary announcing his intention to take legal action against planned state aid for the Lufthansa Group.