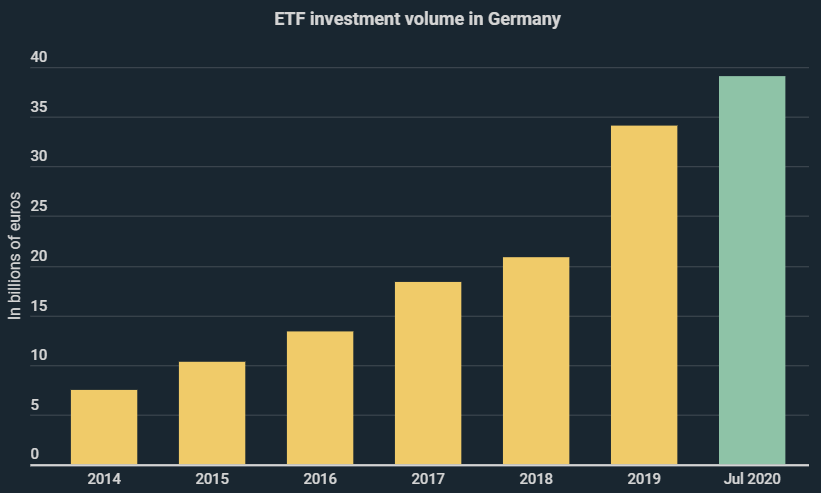 German investment into ETFs has climbed from €20.9 billion to €39.1 billion over the past two years, representing an increase of 87%. This can be seen in a new infographic from Kryptoszene.de.  According to Blackrock strategist Salim Ramji, ETF capital could “easily double, triple, quadruple”. The analyst from the world’s largest asset manager expects worldwide investment into ETF funds to climb from $6.5 to $12 trillion US by 2023.

As the infographic shows, the trend towards ETFs is illustrated by several indicators. On the one hand, more and more investors are turning to ETF savings plans: today there are around 1.8 million such plans in Germany alone, compared to just 157,979 in 2014. On the other hand, not only are Germans increasingly relying on savings plans, at the same time they are also investing more on average. The average ETF savings plan rate amounts to €174.50; just two years ago it was €144.90, according to data from an „ExtraETF“ survey.

The pandemic could further fuel the ongoing upward trend towards ETFs. As can be seen in the infographic, 34% of Germans have been increasingly interested in financial investment since Covid-19, With ETFs also increasingly popular, it seems obvious that some of this money is flowing into them, and ETF vendors stand to gain disproportionately.

Blackrock is the world’s largest provider of ETFs. The asset manager holds over a third of the market share of all relevant providers. A look at past price development shows Blackrock to be one of the beneficiaries of the crisis – or of the ETF hype? In the last 6 months their share price has increased by 19.9%. The Dow Jones and DAX rose by just 11.9% and 8.9% respectively over the same period. Looking back over the year, the gap is even wider: Blackrock shares are up 31%.

An analysis of Google data also reveals the rising popularity both of  Blackrock shares and ETFs. At no point in the last 5 years have more people in Germany searched for „Blackrock stocks“ and „buy ETFs“ than in 2020. The Google trend score, an indicator of relative search volume, reached the maximum value of 100 for both search term pairs.