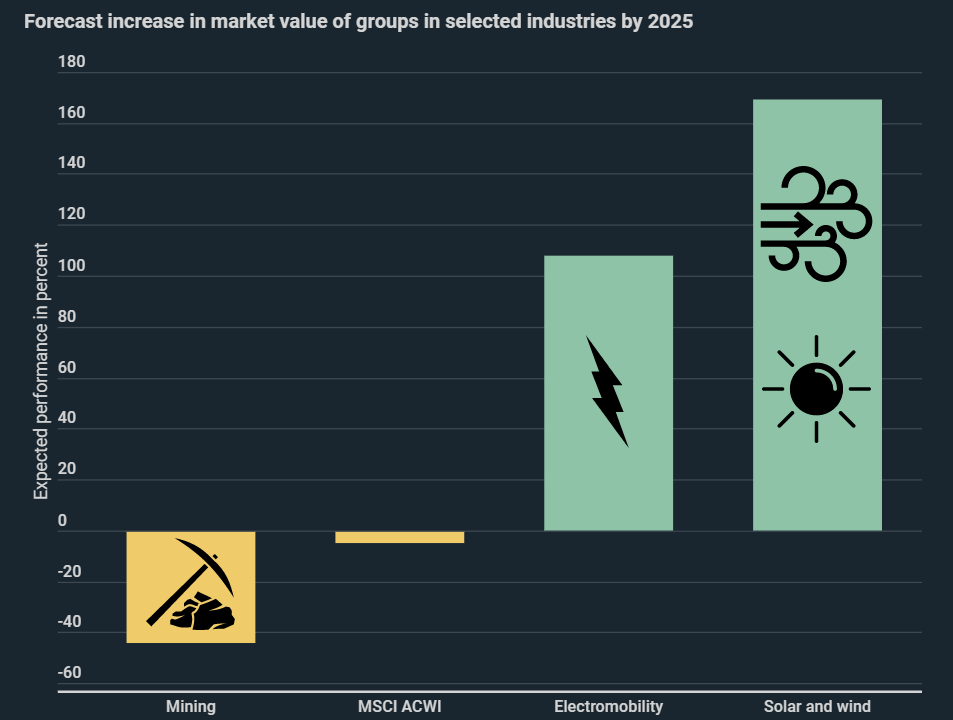 By 2025, publicly traded companies from the solar and wind energy sectors could boast share price gains of up to 169%. This emerges from the findings of a new infographic from Kryptoszene.de. According to the results of the study, this could even be the biggest growth industry.

The authors of the study „Principles Responsible Investment“ predict that some industries will suffer losses over the next five years. According to the survey, the value of the international stock index MSCI World ACWI is due to fall by up to 4.5%. Irrespective of the anticipated overall downturn on the stock market, the analysis assumes that solar and wind stocks will gain around 169%.

The second-largest beneficiary could be the electromobility sector. The experts are predicting share price gains of up to 108% by 2025 for leading companies in this field.

Meanwhile, according to the PRI survey, future policymakers are likely to intervene even more substantially in the market to promote climate protection. The risk of climate change at the same time could be being underestimated on the trading floor.

A study from „Green-City“ reveals that German citizens also seem to see potential in renewable energies. 59% of the population tend towards solar energy, while only 4% are in favour of reliance on coal-based electricity. Furthermore, 8 out of 10 of those surveyed stated that they expect wind and solar energy to become more widespread in the coming years.

Share Price Performance for Shares in Wind and Solar

Despite such optimistic forecasts, the market value of numerous shares has declined since the stock market crash on February 19th. First Solar has lost around 18.9% of its market value since then, although compares to declines in the Dow Jones and DAX of 13.2% and 12.7%, respectively. Conversely, the price development of solar company Enphase Energy has been positive, with share prices increasing by 4.4% since the crash.