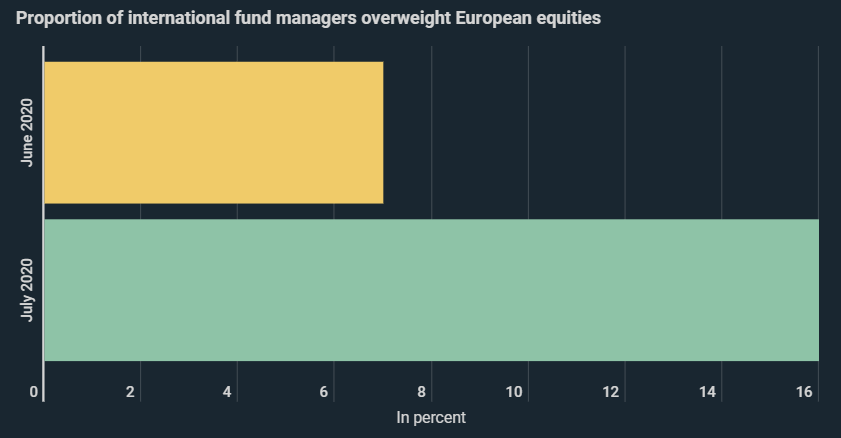 16% of international fund managers are overweighting European equities, compared to a mere 7% last month. Investors underline that Europe is managing the crisis better in the face of the corona pandemic. This is shown in a new infographic from Kryptoszene.de.

Back in May of this year, the situation was completely different: 17% of institutional investors were underweighting European stocks, as shown by data from Bank of America’s monthly fund manager survey and reported by the „Handelsblatt“. This could however only be the beginning. One in five professional investors claims to want to expand their European stock proportion even further.

German and European Stocks on the Up

The infographic shows that the DAX has fared better than the Dow Jones since the stock market crash on February 19th, although both indices have lost value. The 6.9% decline in the value of the DAX, however, is significantly less than the fall of 9.2% for the Dow Jones.

In terms of relative Google search volume, the DAX is also ahead of the US index, as shown in the chart. It is not just institutional investors who seem to see great potential in Europe.

Martin Lück, capital market strategist at Blackrock, believes that better crisis management in Europe is helping companies based here. However, a „Citywire“ survey from the end of last year showed that professional investors had already been already paying more attention to European stocks before the outbreak of the corona crisis. 42% of professional investors surveyed reported a positive attitude towards European stocks – compared to only 29% in the case of US securities.