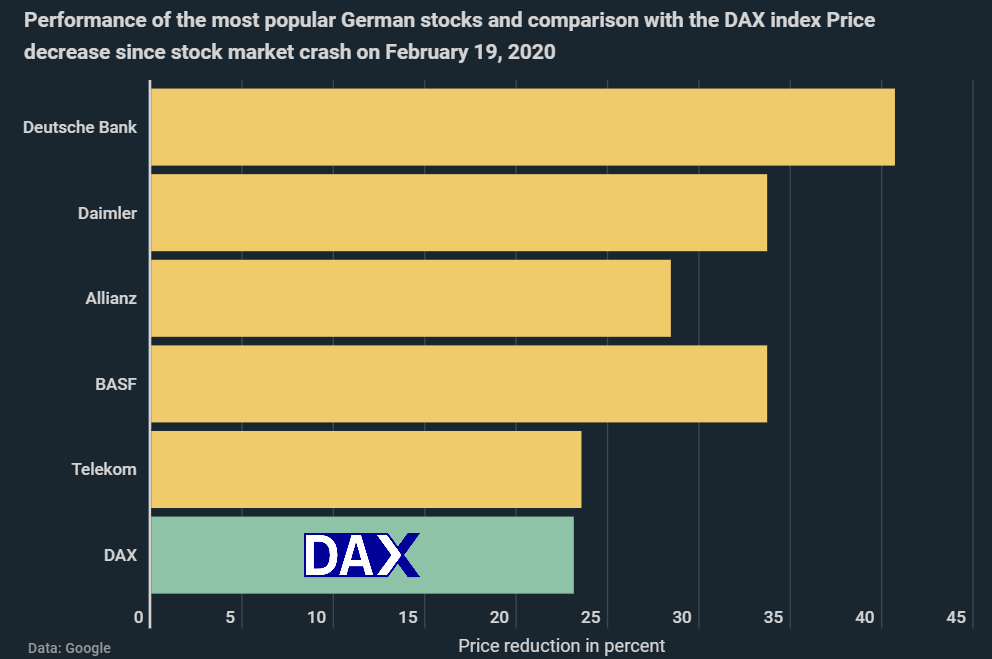 The five stocks that are popularly represented in German stock portfolios have performed significantly worse than the DAX index in recent months, as can be seen on a new infographic by Kryptoszene.de. DAX has lost around 23% in value since the stock market crash on February 19. Deutsche Bank – one of the most popular stocks in Germany – lost up to 40.7%.

Five securities, which are, according to „ING„, present in most stock portfolios in Germany, have all significantly lost in value since the beginning of the corona-crisis. Namely: Deutsche Telekom, BASF, Allianz, Daimler as well as Deutsche Bank. As shown on the infographic, the most popular stocks have not just performed worse than DAX in the short term.

In the meanwhile, the infographic shows that Germans not only seem to be investing in poorly performing stocks. The country’s stock culture is generally quite weak.  According to „LBBW Research„, the quota of shareholders in Germany is around 10%.  In international comparison, this value proves to be very low.

In the Netherlands, for example, around 30% of people own securities. People in the USA and the UK also invest significantly more in equities (25% and 23%, respectively). Overall, it seems that Germans hold on to securities longer, regardless of how the price is developing.  Wall Street’s sharp tongues call this behavior „Stupid German Money“.