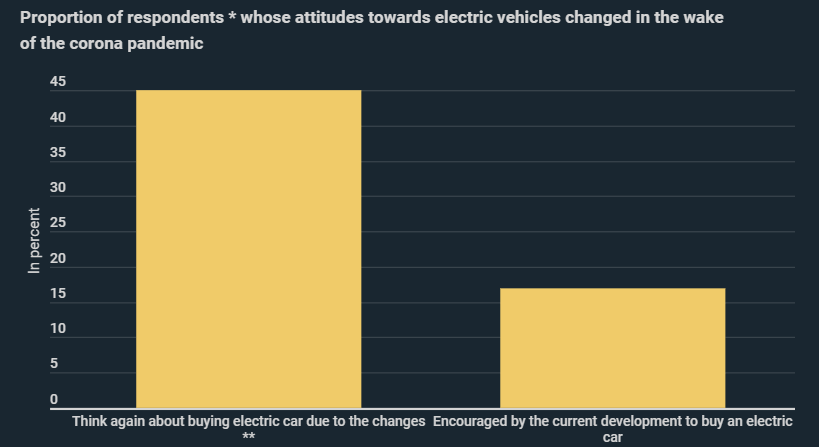 As a result of the changes put into motion by the coronavirus pandemic, almost one in two people is considering buying an electric car. Meanwhile, 17% of people who were already considering e-buying, feel encouraged as can be seen on a new infographic by Kryptoszene.de. The data also show that this development is particularly playing into Tesla’s hands.

The infographic shows that Tesla could significantly benefit from this:  With 300,075 units sold in 2019, the Tesla Model 3 is by far the best-selling electric car. BMW 530e/Le – a model of a German automotive company – is in the 6th place with 51,083 units.

Despite a turbulent start to the year, Tesla reports record numbers in other aspects: the company has never sold more vehicles in the first quarter of a year. In total, Tesla sold 88,400 cars in Q1 this year, compared to 63,019 in the same period last year. As a result, the US company has sold more electric vehicles in one quarter than Volkswagen in 2019 as a whole.

Although Tesla has been recently reporting very successful numbers, this does not seem to be reflected in the company’s current stock price development.  Since the stock market crash on February 19, 2020, the price of Tesla shares has dropped by around 39%.

Shareholders of German automobile manufacturers also had to go through significant price losses.  The Daimler stock market value decreased by 30.3% in the same timeframe. Volkswagen and BMW have experienced significant losses as well, at 27.5% and 21.5%, respectively.  Nevertheless: Tesla is relatively more affected, even considering the rising demand for electric cars in the eye of the corona-crisis (as shown on the infographic).