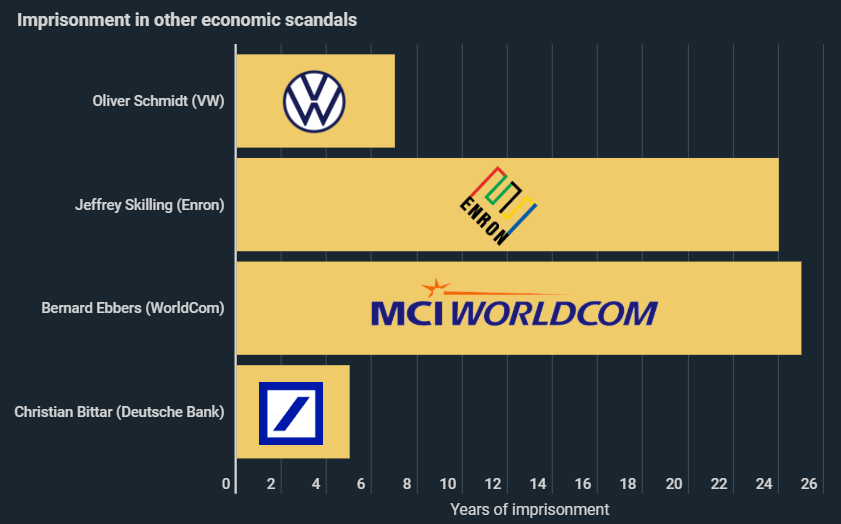 Previous economic scandals have resulted in prison sentences of up to 25 years. As a new infographic from Kryptoszene.de shows, Wirecard’s management is particularly vulnerable to accusations of stock market manipulation, falsification of balance sheets and defrauding banks with respect to credit agreements.

Ex-Wirecard boss Markus Braun was released on Tuesday after posting a bail of 5 million euros, according to the Munich public prosecutor’s office. Nevertheless, involved parties could still face high fines and prison sentences, as a look at history shows.

In 2005 Bernard Ebbers, former CEO of telecommunications company WorldCom, was sentenced to 25 years in prison for financial statement fraud, which he served until his death. In the past, managers of Volkswagen and Deutsche Bank who had been involved in scandals have similarly had to spend several years in prison. It is however the case of Enron that analysts are frequently comparing with Wirecard. For instance „Manager Magazin“ speaks of a „German Enron case“. The US group was forced to pay fines amounting to 7.1 billion US dollars, and the insolvency resulted in a loss of 60 billion dollars in the company’s market value, as the infographics show. Wirecard’s market capitalization has so far lost up to 10.7 billion dollars.

Aside from potential prison sentences, the Aschheim-based company will also have to deal with waves of lawsuits. Claims for damages amount to 2 billion euros to date. In addition, it appears that 1.9 billion euros are missing entirely, as stated in Wirecard’s balance sheet. In contrast, the payment service provider claimed to have generated profits of 347 million euros in 2018 – although this sum could still be adjusted substantially downwards in light of further audits.

Wirecard Managers May Benefit From Being Based in Germany

Although in Wirecard’s case long prison terms and hefty compensation payments do not seem unlikely, the responsible parties could reckon with a comparatively lax ruling in Germany for white-collar crime. This is illustrated by a comparison with US cases. For example across the Atlantic, investment fraudster Bernie Madoff faced 225 years in prison – though he is in Germany and therefore not open to prosecution by the US judiciary.