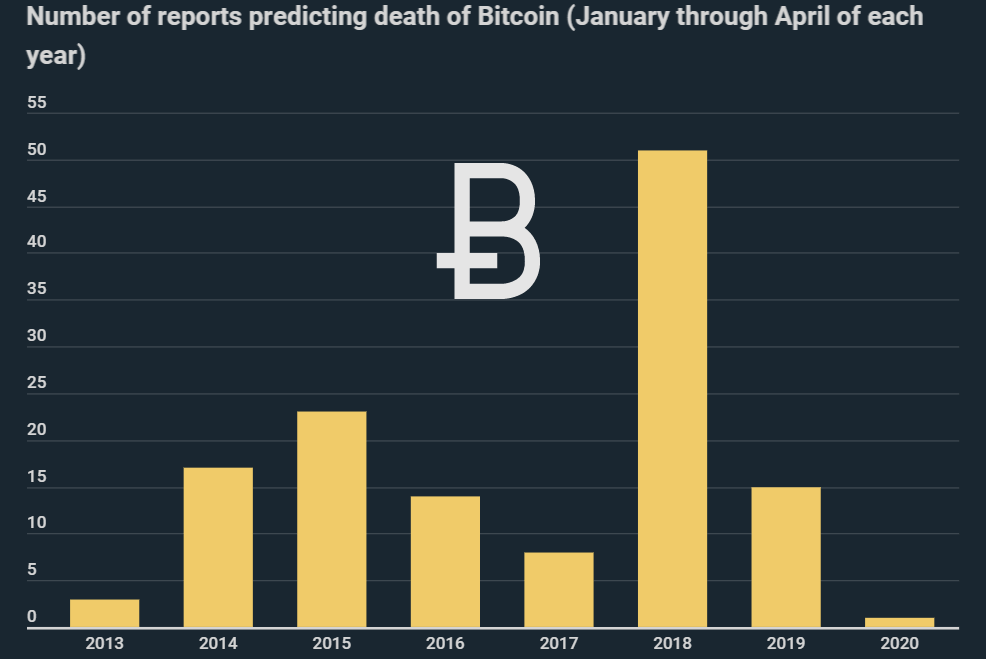 Reports in high-circulation newspapers forecasting the collapse of Bitcoin have fallen by around 98 percent since 2018. During the first four months of 2020, fewer critical BTC stories been published than ever before, according to a new infographic from Kryptoszene.de. Meanwhile, it seems policymakers are less wary of the digital currency than they have long appeared to be.

Between January and April of this year, the portal „Bitcoin Obituaries“ lists only one article claiming Bitcoin’s impending demise. 15 articles were published in the same period last year, and 51 two years ago. At the end of the past year, significantly more critical articles were published, with titles such as „Bitcoin is Dying“ (CCN), „All Crypto Currencies Will Disappear“ (Portfolio Wealth Global) or „Bitcoin, the End of an Era“ (Trading View).

Since the portal does not disclose its collection methods, the data cannot be considered representative. Nevertheless, they largely coincide with in-house investigations by Kryptoszene.de. Here, Bitcoin coverage in supra-regional German-language media was analyzed on a random basis. The results show that not least since the outbreak of the corona crisis, an increasing number of neutral or positive articles have been published about the cryptocurrency with the largest market capitalization.

Bitcoin in the Media – a Retrospective View

Past studies can at least show that between 2011 and 2018 media coverage was predominantly negative. Of the 1,498 articles on Bitcoin that were analyzed, 53% were negative, 24% neutral and only 23% positive, according to the research association.

However, the latest survey indicates that this trend may have already been reversed. There are increasing reports of a growing acceptance of Bitcoin as a means of payment (Finanzen.net), Bitcoin’s new hype as a result of Corona (ARD), and Americans increasingly investing their government payouts in Bitcoin (Forbes).

BTC in a Better Light?

Various factors could be giving the crypto currency a boost, although no empirically proven data is yet available. It is clear that the German government considers the risk posed by the digital currency to be low. According to the „First National Risk Analysis“ by the Ministry of Finance, the potential for money laundering is negligible. Bitcoin also appears to play at most a subordinate role in the financing of terrorism.

Meanwhile, Bitcoin’s market performance could also be having an impact on reporting. In this regard the digital currency will undoubtedly shine in 2020. While the DAX has lost 22% since the beginning of the year and the Dow Jones has also dropped by 17.8%, the price of Bitcoin has climbed by 21.8%. As the infographics show, even gold –  a classic hold in times of crisis – could not keep up with BTC. The value of the precious metal increased by 15.2%.