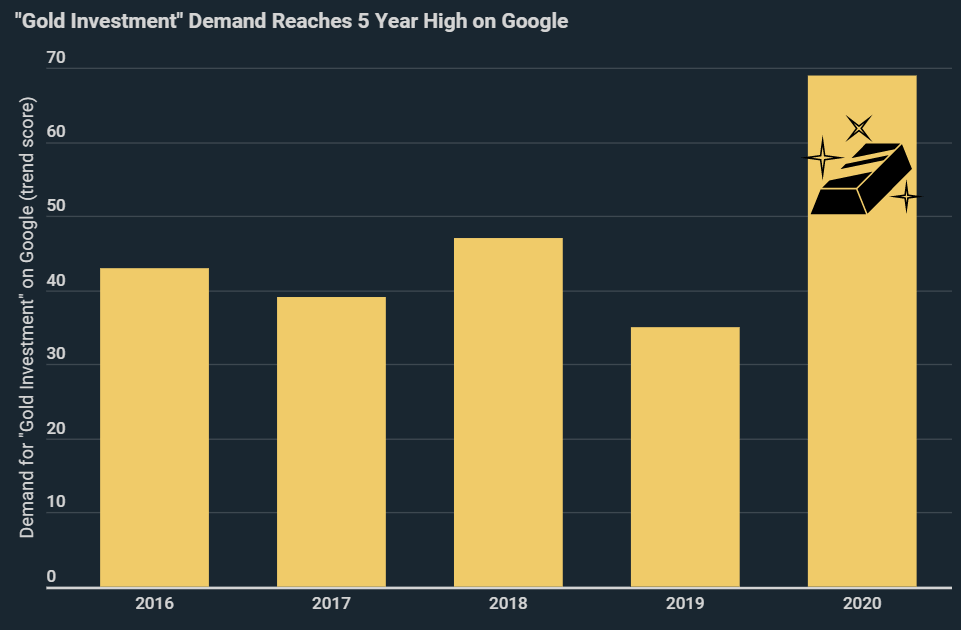 The coronavirus is on the rise. It no longer stops at the European borders. In addition to the sometimes dramatic consequences for those affected, the looming pandemic also severely affects the international financial markets, as shown on the infographic by Kryptoszene.de. More and more investors are preparing for worse and investing their capital in gold and bitcoin.

Gold demand breaks record levels: the search term “Gold Investment“ has reached the peak of its popularity in Google compared to January and February. In comparison to the same period last year, the relative search volume increased by around 97%. It did not rank this high even during the 2008/2009 financial crisis. Worldwide, mind you. This information derives from calculations by Kryptoszene.de based on Google Trends data.

The trend continues in the visits to the industry platform „Gold.de“. Before the Corona outbreak in November 2019, there were 2.244 million visitors; in January, the homepage already recorded 3.730 million visits. And gold is not the only commodity to behave this way. A similar trend can be noticed in cryptocurrencies, especially by BTC, the so-called „digital gold“.

Coronavirus and its effects on the Bitcoin rate

It turns out that not only financial platforms that primarily deal with gold are on the rise these days. A similar trend presents itself for cryptocurrency exchanges and information providers. In December 2019, the coronavirus did not yet play a significant role in the global market. The first warnings from Beijing to the World Health Organization appeared only on December 31st. On January 13th, the virus spread outside of China.

The result: investors are fleeing to „crisis havens“ such as Bitcoin – according to the reports by „Focus“, „BTC-Echo“ and “Der Aktionär”. Reports by Kryptoszene.de seem to confirm this information. The number of visits to „Bitcoin.de“ has increased by 18% since the outbreak of the coronavirus. Kryptoszene.de themselves experienced a 30% increase in visitors. During the same period, the BTC rate increased with a similar magnitude: by 35%.

It is sometimes difficult to separate correlation and causation. However, different sets of data show that the demand for gold and Bitcoin rose sharply with the spreading of the coronavirus. And we are not talking about a small rise – the market increased by as much as 97%. The second consequence is a rapid increase in prices. All of this confirms the status of bitcoin and gold as a crisis currency. The so-called „Doomsday Clock“ of the US nuclear researchers is 100 seconds to twelve: the latest crisis signs values ​​may, therefore, only be the beginning.