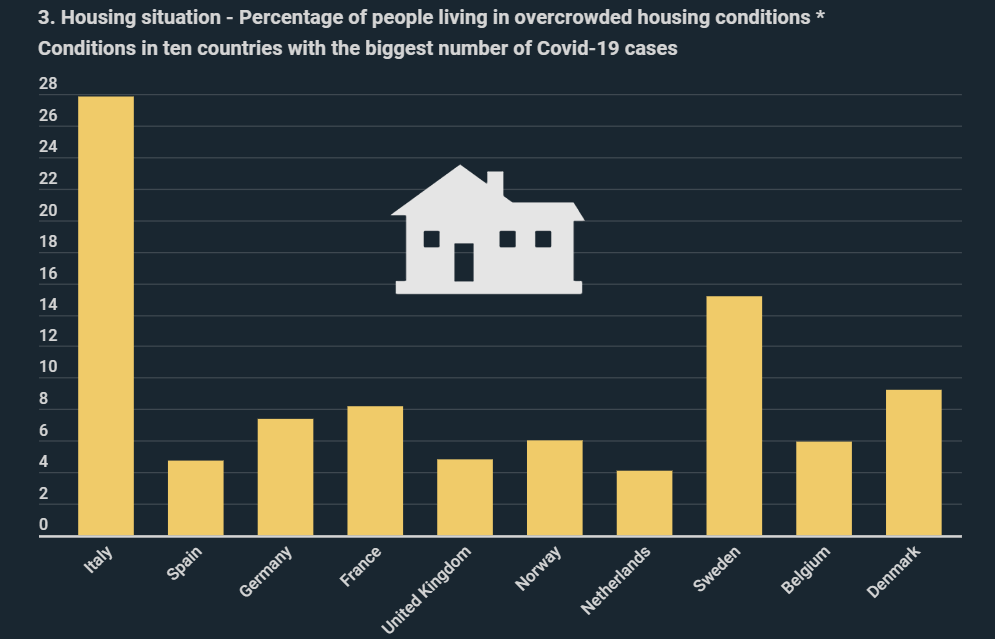 The average age in Europe is the highest in Italy, closely followed by Germany. A new infographic by Kryptoszene.de shows that Germany and Italy offer the COVID-19 virus an optimal environment.  In Italy, 27.8% of citizens live in highly populated areas, which facilitates the transmission of the virus.  5 theses in analysis:

Thesis 1: Italy and Germany are more affected by coronavirus due to the higher average age

The average age (median) within the European Union is 43.1 years. The Italians are at the top of the rating, with an average of 46.3 years, followed by Germany with 46 years („Eurostat„). The elderly are, indeed, affected by coronavirus more seriously. However, this is not the only factor that plays a role. This claim is supported by research by Kryptoszene.de: the average age in Portugal is the third highest at 44.8 years, but so far, there are only 245 registered COVID-19 cases.

Thesis 2: Italy and Germany are more affected due to a higher population of smokers

According to reports from „The European Scientist“, smokers are a risk group.  However, it turns out that the proportion of smokers in Italy and Germany is 25% and 24%, respectively, which is roughly the European average.

Thesis 3: Italy and Germany are more affected due to a higher population density

The findings here are quite impressive. According to an infographic by Kryptoszene.de, in Italy, the number of people living in overcrowded conditions – residents who do not live in their own room, according to Eurostat –  is by far the largest – 27.8%.  At the same time, Italy is affected far more seriously than other EU countries. The harsh living conditions may facilitate the transmission of the virus. In Germany, 7.4% live in densely populated conditions, which is still significantly higher than, for example, in Great Britain (4.8%), the Netherlands (4.1%) or Belgium (5.9%).

Thesis 4: Italy and Germany are more affected due to poorer healthcare

The results here are ambivalent: it is undoubtedly true that, in Italy, healthcare quality is below average, if judged by the number of hospital beds per thousand people – 3.4. Germany, on the other hand, is at the other end of the rating – with 8.3 beds per thousand inhabitants.  However, the data by „Worldometer„, shows that the number of deaths in Germany is below average, whereas Italy as at above average – a factor that may suggest that the Italian healthcare system may be overwhelmed.

Thesis 5: Italy and Germany are more affected by coronavirus due to their remarkable economic position

Italy and Germany are among the economic drivers of the European Union.  The high amount of trade connections may increase the contamination speed in the two countries. The national distribution suggests this: the infographic shows that, in Italy, there are 13,272 infected in Lombardy alone.  At the same time, GDP per capita here is significantly higher than in most regions of Italy. The same in Germany: Bavaria, Baden-Württemberg, and North Rhine-Westphalia are the federal states with the highest GDP and, at the same time, with most people infected with COVID-19.

The effects on Italy and Germany are real. Our research identified factors that may (partly) explain the disproportionate spread of COVID-19 in the two countries.  The spreading of the virus affects not only people but DAX, TecDAX, and a large part of German and Italian stocks.