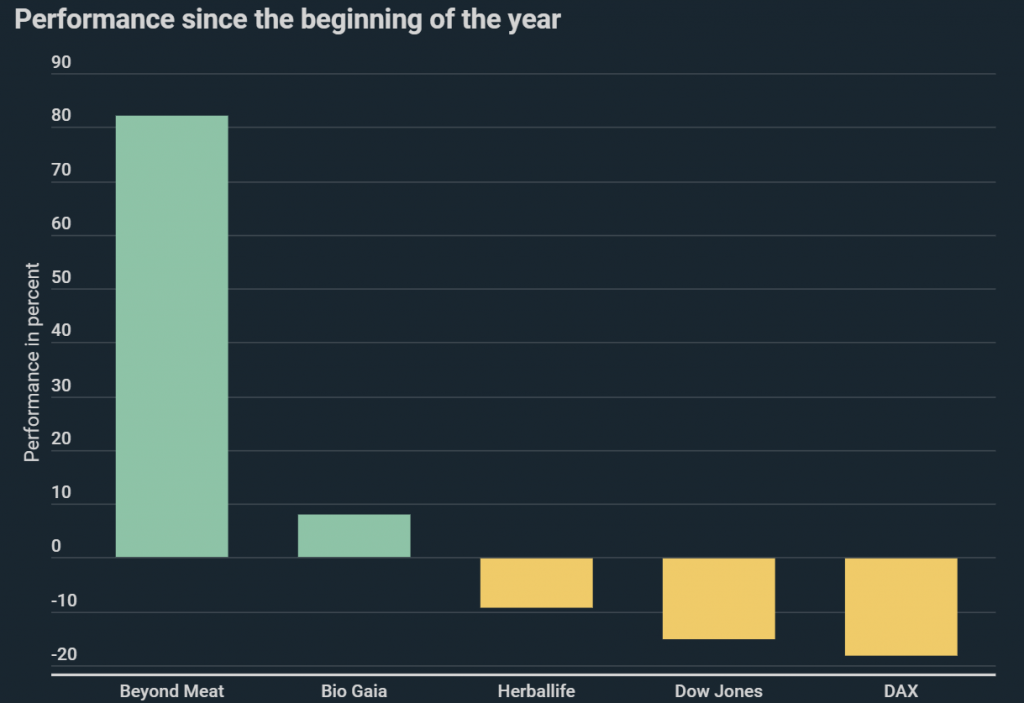 Listed manufacturers of animal-free products are thriving in spite of the corona crisis. Beyond Meat share prices have increased by around 156% since 18th March. A new infographic from Kryptoszene.de shows that shares in other industry leaders have also performed significantly better than the market as a whole. This is clearly demonstrated by a comparison to the DAX and Dow Jones. Forecasts indicate that this could be just the beginning of a long-lasting growth trend.

While Beyond Meat has grown by 82% since the beginning of the year, Bio Gaia has gained a mere 8%. Herballife’s share price performance illustrates that not all companies manufacturing vegan products are enjoying growth, with share prices falling by 9% so far this year. However compared to the Dow Jones (-15%) and DAX (-18%), the firm’s performance is still strong. However, Kane Pepi, editor of Buy Shares UK, warned: „Recent price changes and revised estimates of earnings means momentum investors should stay clear of Beyond Meat shares for now.“

Worldwide around one billion people currently do without animal products. In Germany 1.3 million live vegan, with another 6.1 million vegetarians. Every day another 200 vegans and 2000 vegetarians join their ranks.

Sales of vegetarian and vegan products in Germany have increased by 65.3% since 2017.

However, according to forecasts from consultancy outfit Kearney, we are only at the beginning of this development. According to their predictions, sales of vegan meat products will be worth 120 billion US dollars worldwide by 2025, reaching 450 billion US dollars by 2040. At the same time, analysts anticipate declining sales of conventional meat.

While sales for meat products in 2025 are expected to remain significantly higher than this, at 1,080 billion US dollars, this is expected to decline by around 33% by 2040.

According to a „Veganz“ survey, animal welfare was a factor for 95% of respondents who do without animal products. 83.9% also listed environmental reasons as a factor in opting for vegan products.

Presuming that this is not merely a passing trend, such companies as Beyond Meat, Bio Gaia & Co. could reap significant benefits. In any case, at present there seems to be much to suggest further growth, as shown in the infographics.