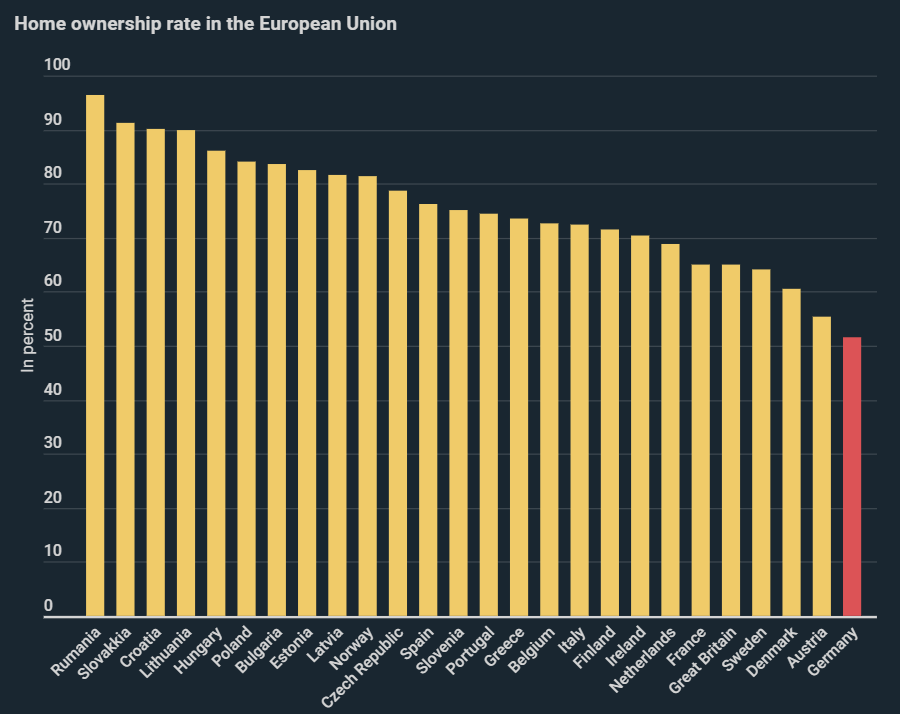 The average (median) German owns the equivalent of $35,313 US; in Great Britain per capita wealth is 176% higher, amounting to $94,452. As shown in a new infographic from Kryptoszene.de, German citizens find themselves far behind even in an EU comparison. One possible reason is the Germans‘ scepticism of different assets.

Fact 1: Only just over one in two Germans owns property

51.5% of Germans own residential property. This puts Germany at the bottom end of the scale. Romania has the highest share with 96.4%. Mediterranean countries such as Spain (76.3%), Portugal (74.5%) and Italy (72.4%) all have a significantly higher ownership rate than in Germany. This can be seen in data from „Eurostat“. According to Dr. Rainer Zitelmann, sociologist and wealth researcher, real estate ownership forces people to be strictly disciplined and save money.

Fact 2: Only one in ten own shares

As the infographics show, only 10% of the population in Germany own shares. In Great Britain the figure is more than twice as high at 23%. According to a survey by LBBW Research, the proportion of shares ownership is even higher in the USA (25%) and the Netherlands (30%).

67% of Germans say that they do not invest in stocks because they are too afraid of high losses due to economic catastrophes. In contrast, 66% are convinced that their assets are too small for equity investments. Overall, fear prevails – be it fear of external factors or due to their own ignorance. 65% do not invest because they believe they know too little about stock markets.

Fact 3: Even cryptocurrencies have a niche existence in Germany

Meanwhile, a recent „BTC-ECHO“ survey shows that not even cryptocurrencies are popular with Germans, although 6% stated that they had already invested in digital currencies. But even here: in other countries the proportion is significantly higher. In Spain, for example, one in ten already has experience with crypto currencies, and in Turkey the figure is as high as 16%.

As can be seen from the infographics, the Germans have relatively few assets in total. The average (mean) wealth amounts to 216,654 US dollars, but the mean value is strongly distorted by a few super-rich people. According to „Credit Suisse“, the median wealth is $35,313, significantly less than in many other countries. Despite a flourishing economy and relatively low unemployment, Germans are not above averagely wealthy – possibly a result of the investment aversion shown in the infographics.